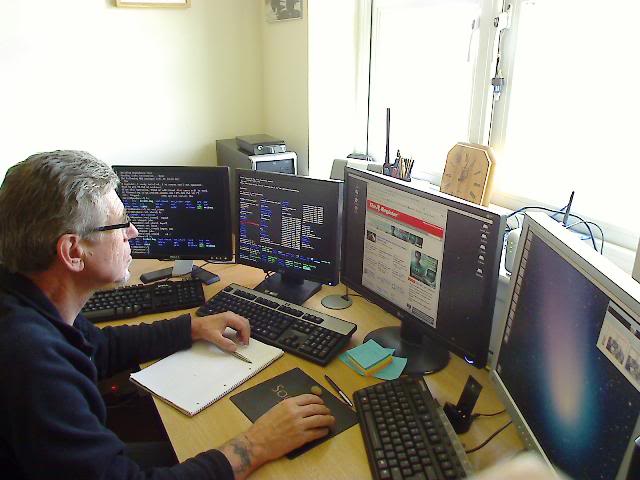 Here I am doing my non-cycling thing – when I’m not out riding or walking our dogs, I can usually be found in front of a computer (or three).

I’m a 65 year old former freelance management consultant living in north east Scotland. Long distance cycling is ‘what I do’ and takes up most of my spare time. I also enjoy ‘messing around with computers’ although it has never been how I’ve earned a living. I’ve had a network at home for over 20 years now and have run a dedicated server for the last ten. I’ve recently switched from Microsoft Windows server software to Ubuntu Linux following the purchase of a new dedicated server.

The picture above shows me in front of the screens for my three main computers – from left to right: the file server, the main DNS, mail and webserver, and the dual screens of my workstation. The mail/web server runs Ubuntu Linux server and the file server runs Freenas. The workstation is a really heavy duty beast powered by 2 quad core Intel Xeon processors with 8GB Ram running Windows 7. The graphics card is an ATI V7600 professional specification beast in its own right (it requires its own dedicated power supply!). This computer was originally purchased a couple of years ago for my work which involved producing architectural 3D walkthroughs and a fair bit of GIS mapping work, both of which require some serious computing power. It now mainly serves as my electronic darkroom for photo processing and as a video rendering studio. Downstairs in the living room is a Mac Mini that is set up as a media server providing music and films for the whole house. I also have a Humax PVR that is networked so recorded TV can also be accessed from any computer via the wireless network. For everyday computer needs I use a 13″ Apple MacBook Air. My partner Karen uses an Apple iPad as her computer.

I also have a collection of old computers in full working order including an Atari STe from the early 90’s with many games and also a collection of all the models of handheld computers produced by Psion; from the Psion II through to the Psion 7 Netbook plus a huge range of software and peripherals for them. Someday I’ll get around to setting up some pages on them here.