This event was a total contrast to the previous week’s mountain biking – an 81 mile road race. The Etape Caledonia is the only closed road sportive in the UK, an opportunity to ride at speed using the whole width of the road along with 3,500 other participants. The route is through the very picturesque Perthshire Highlands in Scotland. This was a really early start though as it was a 45 minute drive to Pitlochry for a start time of 7:40am. This meant being up at 4:45am for a decent breakfast and to make sure I could make the start with so much traffic getting into the small town. All went well and I was able to get ready in a leisurely manner and make the start just 10 minutes before my start time to avoid standing in the very damp conditions. The organisation was efficient and my wave of riders left propmtly at 7:40am. My game plan for this event was to take my time settling into the pace then try and hook up with a group of riders moving at an average just under 20mph (30kph). I also didn’t intend to stop at any of the feed stations as I was carrying sufficient energy food and drink to get me through the estimated 4hrs 30min it would take me to complete the ride, (actually I was a bit short of liquid at 1.5 litres but I have a habit of not drinking that much unless the weather is really warm). I reckoned this would save me a substantial amount of time.

The Start (me on the left with the silver helmet)

The strategy broke down fairly early as I got up to speed quickly and found I could leapfrog from rider to rider, only exposing myself to the full effect of wind resistance for short periods. Within about 5 minutes I was travelling along at over 20mph! My heart rate settled down around 160 bpm which is just about sustainable as long as I maintained my energy input so I stuck with the pace. My start was fairly late and I had some 2,500 riders in front of me and throughout the whole event I was constantly overtaking people – right up to the finishing straight and through the finish itself. The road was quite congested for the first 20 miles and I really had to keep my wits about me as I looked for gaps between riders to get through while even faster riders were trying to get past me. After the first 20 miles and past the first feed station riders started to get more spread out and groups began to form. I found I could get onto the back of groups as they came past and get carried along until they either slowed down (which happened a lot) or I lost them as we made our way through large groups of slower riders. Occassionally I found myself at the head of a group as people latched onto my wheel as I passed.

With all the concentration time passed quickly and in no time at all I was at the head of Loch Rannoch and turning back east with 30miles done in 1hr 34min. The ride continued going well, I was maintaining the pace without difficulty and the legs were feeling good. I was remembering to eat every 20min or so and the energy levels felt good. A bad crash at about 35 miles slowed us down as we picked our way past the fallen riders and their bikes and then it was back on the pace. As we came into the next feed station at 45 miles (completed in 2hrs 15min) there were a lot of riders by the side of the road dealing with punctures. As I made my way through the very congested area at the feed station we started to hear stories of sabotage with tacks having been spread on the road. Out the other side of the feed station it was chaos with hundreds of riders lining both sides of the road mending punctures. I crossed my fingers and kept going with the group I had been riding with. The next section is the hardest on the route as the road rises 1000ft (300metres) over the next 2.8km with some sections at 12%. I still felt good and got down to the job in hand, upping the effort to maintain a decent pace up the hill. About halfway up, on the second of the three steeper sections my front tyre punctured, – I had become a victim! I was lucky it was just one tack in my front tyre and 10 min later I was back in the saddle. It transpired later that some riders had suffered more than 5 punctures in each tyre. With fingers crossed I got back into the groove, although by now the field had become so fragmented I was riding on my own and having to work a bit harder to maintain the pace. However, as I reached the turn at the top of the hill I was told by a marshal that the race had been halted and we were all stopped at the top of the descent into the valley. While people were understandably annoyed at the event being spoiled by the selfish stupidity of whoever spread the tacks on the road, there was a good spirit and people gave up their spare tubes to those who had run out and there was a great deal of good natured banter between the riders. The marshals and feed station crew came round to refill water bottles and generally make sure we were ok.

After about 40 min we were allowed to continue although they put motorcycle marshals between groups to limit the speed on the descent due to fears of people puncturing at high speed. At the bottom of the descent we found the organisers had shortened the route, cutting out a 7mile loop. As we had all been held up, the groups had reformed and the next 12 mile stretch along the valley was great fun, riding at high speed in a large group of riders – swooping round bends and punching up the short rises. I covered this section with an average speed over 20mph. In fact I covered the final 25 miles from where we were halted in 1hr 12min. The downhill run to the bridge over the River Tay in Pitlochry in a bunch of about 20 riders was brilliant and the support and appreciation of the crowds at the finish fantastic. I finished in an official time of 4hrs 52min 50sec, Excluding the delay while we halted this was a time of 4hrs 18min 46sec (from my bike computer), a good time given my puncture and just within my target of getting under 4hrs 30min for the full distance. When I first entered this event I was concerned about getting round in the maximum time of 6hrs 15min, by March I knew I could complete it in under 5hrs so to have completed it at the pace I did was just brilliant. Although the results are a bit meaningless given the problems, I am still pretty pleased with 325th overall from 2677 finishers and 30th out of 328 in my age group. I knew I was overtaking a lot of people, but over 2000! Fantastic. 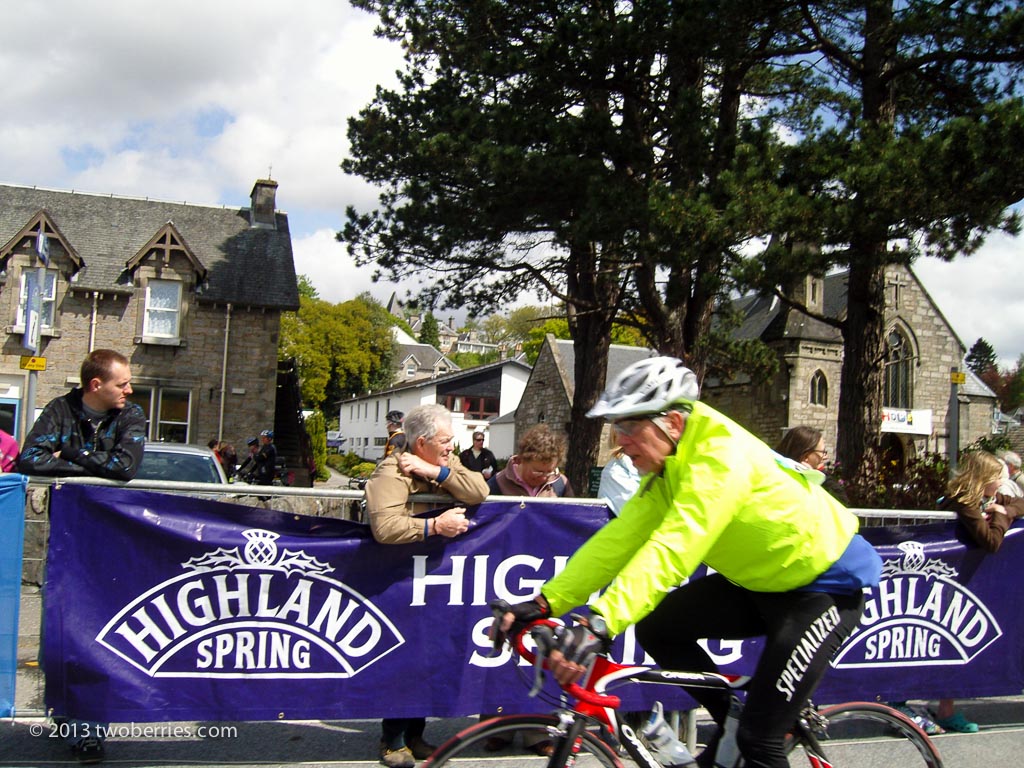